At age 17, McCauley will become the youngest state girls’ golfer to play in the U.S. Women’s Open next month in San Francisco. 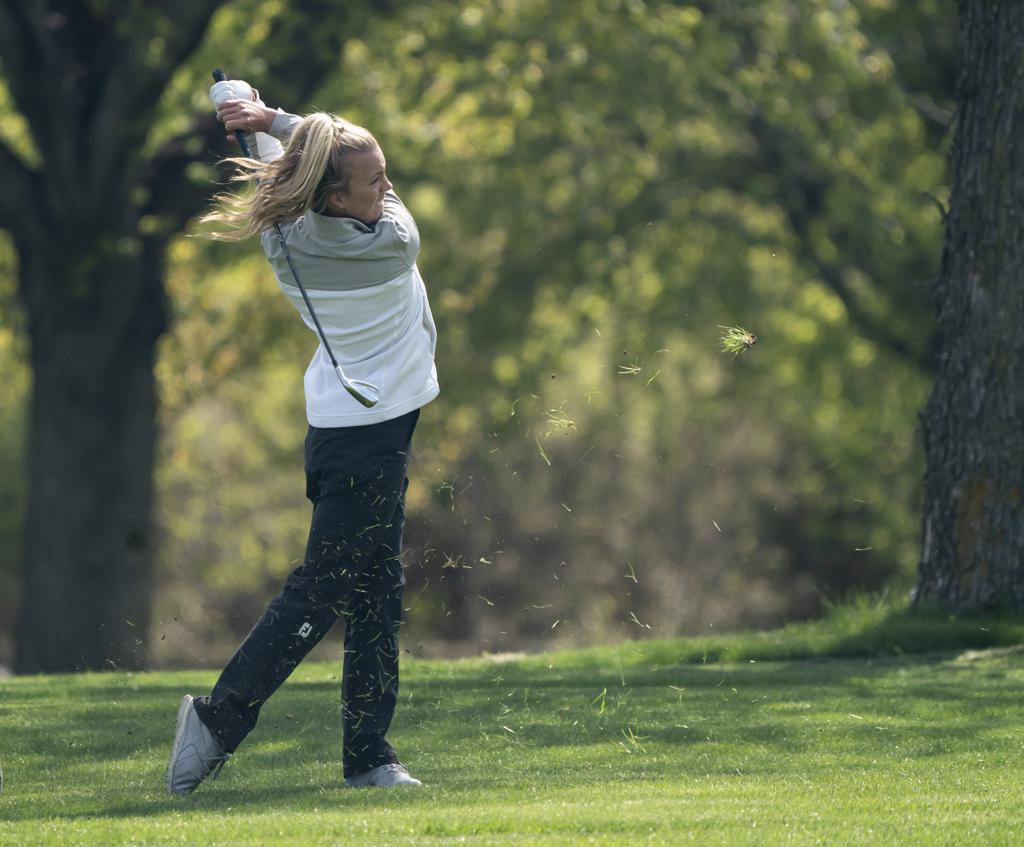 Simley junior Isabella McCauley, who recently qualified for the women's U.S. Open, played during a meet at Rich Valley Golf Club in Rosemount on May 6. Photos: RENEE JONES SCHNEIDER ¥ renee.jones@startribune.com

A 25-foot putt rolled and rolled until it dropped into the cup for a birdie on the second green at Rich Valley Golf Club in Rosemount during a Metro East Conference meet late last week. Isabella McCauley picked up the ball and gave the slightest of smiles as she walked off the green.

It was here, as a 6-year-old, where her father started to hone his daughter’s golf game. Consecutive good shots drew rewards of candy Skittles and Starburst. By age 11 she had enough of them to shoot a 3-under 67 and defeat her dad, Sean, for the first time.

The young phenom, who won the Class 3A golf state meet as a freshman, has since developed a remarkable consistency around the links that will transcend on the women’s premier event.

The Simley junior, now 17, will become the youngest girls’ player in state history to compete in the U.S. Women’s Open, to be held June 3-6 at The Olympic Club in San Francisco. It will force McCauley to miss the Class 3A, Section 3 tournament scheduled for June 4, and not qualify for this year’s state tournament.

McCauley captured one of the two spots in an Open qualifying tournament earlier this month at Somerset Country Club in Mendota Heights.

“I couldn’t stop smiling for an hour after the tournament,” said McCauley, known as Bella to many friends. “It was such an awesome feeling.”

“Playing in the U.S. Women’s Open is the opportunity of a lifetime,” said Lunke, an Edina native who won the Class AA individual state championship in 1997. “It’s fantastic.”

Lunke didn’t have to choose which tournament to play in back then because the U.S. Women’s Open was held later in the year.

One the hardly imposing 5-2 McCauley envisioned. She registered to play in the qualifying tournament in early March, just before giving a college commitment to the Gophers in the middle of the month.

“I didn’t really pay any attention to when or where the U.S. Women’s Open was,” McCauley said. “I knew there could be a conflict, but it never crossed my mind that I would make it.”

For McCauley, it took a strong finish on the second day of the qualifying tournament to accomplish the feat. She played the final seven holes in 3-under-par to claim the second spot by one stroke. She eagled No. 12 with a 52-yard chip and birdied No. 15 and 17 and bogeyed 13.

“I thought I was out of it until that eagle. I wanted to finish strong,” McCauley said. “That put a little pep in my step.”

Just like Jody (Rosenthal) Anschutz had during her LPGA career. Before Lunke, she was the youngest state qualifier for the Open. It came after her sophomore collegiate season at Tulsa.

“I had steadily been progressing, and that was the next phase for me,” Anschutz said. “That was huge for my career.”

The three-time Class AA state champion (1979-81) from Hopkins Eisenhower/Lindbergh played in the event 15 years, making the cut 11 consecutive times. Lindbergh merged with Eisenhower in 1981.“The U.S. Women’s Open is a big time deal, a huge event,” said Anschutz, who tied for fifth place in 1986 and shared fourth a year later, her highest finishes in the tournament. “I can’t imagine playing in that tournament at such a young age.”

McCauley started playing when her father was looking for a golfing partner. His youngest daughter, Reese, would join the two a couple of years later. Now a Simley freshman, Reese is currently ranked second in the state, behind her older sister, by the Minnesota Golf Association.

“He made it so fun to go to the golf course,” said McCauley, whose drives average 240 yards off the tee. Those shots consistently find the fairway and help her then reach greens in regulation.

Five years later, McCauley was beating her father for the first time.

“I was hoping she would get to my level by the time she was 16 or 17,” said Sean, whose brother, Mike, is Isabella’s caddie. “I loved it when she beat me. It was so exciting that I went crazy. Let’s just say, she was a little ahead of the curve.”

A year later provided a clearer path of McCauley’s future. As a 12-year-old, she won the Minnesota Warrior Cup, for golfers ages 13-15, in a playoff.

“That was against all my peers, people I looked up to,” McCauley said. “I was able to do well under pressure, so that was really cool. It gave me a lot of confidence.”

Two years ago, McCauley won the Class 3A individual state championship at Bunker Hills Golf Course in Coon Rapids. She shot a record-tying, 9-under-par 135 en route to a 10-stroke victory.

“That was my best performance at the time,” McCauley said. “It’s a moment I will always remember and cherish.”

She did not get a chance to repeat as champion in 2020 because the pandemic canceled high school spring sports. The timing of the U.S. Open means she won’t repeat this year, either.

In the Open qualifying tournament, McCauley shot a 1-under-par 143 to finish one stroke back of LPGA touring member Sarah Burnham, who was the 2013 Class 3A state champion at Wayzata. It’s the second time Burnham qualified for the event; she also made it after her freshman season at Michigan State in 2015.

“I always looked up to Sarah as a kid,” said McCauley, who edged Lindy Duncan for the final spot. Duncan has more than $1 million in career earnings on the LPGA Tour.

McCauley and Burnham met for the first time during qualifying. McCauley said she hopes to play a few practice rounds with her before the event. McCauley is also looking into the possibility of playing a practice round or two with current LPGA touring players in San Francisco before the tournament.

“You definitely want to play practice rounds with the pros,” Anschutz said. “It’s a much different element. It will get you out of your comfort zone.”

The tournament itself will do just that as well. Lunke warns against what troubled her about that initial appearance.

“I left frustrated because all I was worried about was my score,” Lunke said. “You need to enjoy the experience and not worry about the result.”

McCauley plans on doing just that in three weeks.