Like her sister, Simley's Reese McCauley wins 3A golf title as freshman

A recap of individual and team winners in all three classes of the girls' and boys' state tournaments. 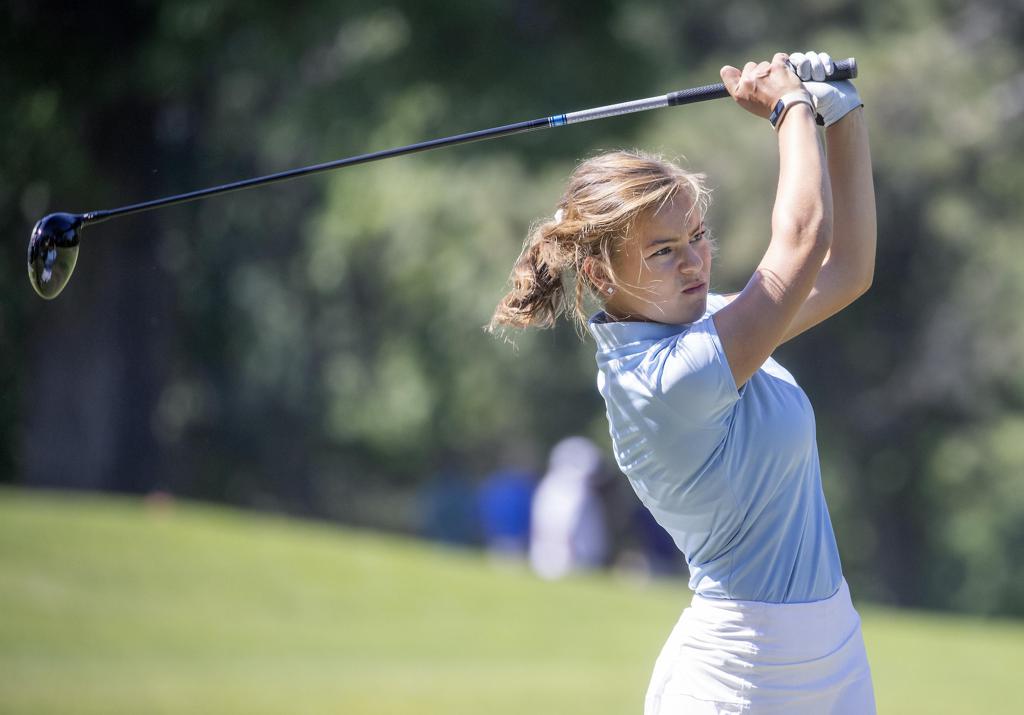 Reese McCauley of Simley and Olivia Salonek of Roseville have known each other for years, practically since they were born. As high school golfers competing Wednesday in the Class 3A girls’ state meet, they started the final round tied for first.

Even in such a close contest, McCauley tends not to look at the standings while she’s golfing. So when the freshman made her putt on the 18th hole at Bunker Hills Golf Club in Coon Rapids, she didn’t know she had won the state championship. She learned it when Salonek told her, causing McCauley’s mouth to fall open on the green.

Salonek and McCauley had traded the lead all day. By the 15th hole, McCauley was behind one stroke, but her birdie on the 16th hole put her back even with Salonek.

“That was a little nerve-racking,” McCauley said. “I was shaking after I made the putt.”

Salonek made a bogey on the next hole, giving the advantage back to McCauley, who made par on the final two holes to seal the victory. Running out to hug her was older sister Bella McCauley, who passed up trying to qualify for this year’s tournament to compete in the U.S. Open.

Bella McCauley said it was more stressful watching Reese than playing herself.

“I think [Reese] tends to put pressure on herself,” Bella said. “I won when I was in ninth grade, so I think she had that in her mind. I was like, ‘No, don’t even think about that at all. Just go and play your game.’ ”

In the team competition, Alexandria, making its 21st state tournament appearance since 1977, captured the girls’ team title for the first time since 1992. The Cardinals were a close second behind Maple Grove headed into Day 2 but won by 22 strokes.

Class 3A boys
In the Class 3A boys’ tournament, Northfield junior Nate Stevens won with a 10-under two-day score of 134.

Northfield's Nate Stevens, who won the Class 3A individual title, putted on the fourth hole.

Stevens started the day tied with Edina’s Jack Wetzel after each posted 68 on Tuesday. Stevens made four birdies on the front nine Wednesday to pull ahead as Wetzel finished 1-under on the same stretch.

Meanwhile, Minnetonka’s Ian Meyer shot a 5-under 31 on the front nine to put himself in second place, one stroke behind the leader.

“I looked [at the leaderboard] on hole 10 and I saw Ian was going crazy,” Stevens said. “I knew I couldn’t just keep making par; I had to make more birdies.”

Meyer birdied the 15th hole to tie Stevens. But over the final holes Stevens regained the lead to finish two strokes ahead of Meyer, who placed second.

Class 2A girls
Lake City captured the team title with an overall score of 673. Mallory Belka of Perham held onto her Day 1 lead to win the individual title at Ridges at Sand Creek Golf Course in Jordan.

Class 2A boys
Cloquet won the team title with a 598, finishing 18 shots ahead of runner-­­up Totino-Grace. Sam Baker of Cloquet was the individual winner. He shot a 73 on Day 2 to put him at 141.

Class 1A girls
Emily Stueland of Park Christian and Sarah Halvorson of Lac qui Parle Valley tied for first place in the individual tournament, with each shooting 166 over the two rounds at Pebble Creek Golf Course in Becker, Minn. She helped her team, which led after the first round, win the team championship with a score of 720.

Class 1A boys
Fertile-Beltrami claimed the team title with a score of 629 overall. The Falcons’ Rylin Petry was the individual state champion with a 146.