A round of 7-under-par 65 left her two strokes ahead of the closest Simley sister; the 3A boys have a tie at the top that includes defending champ Nate Stevens of Northfield. 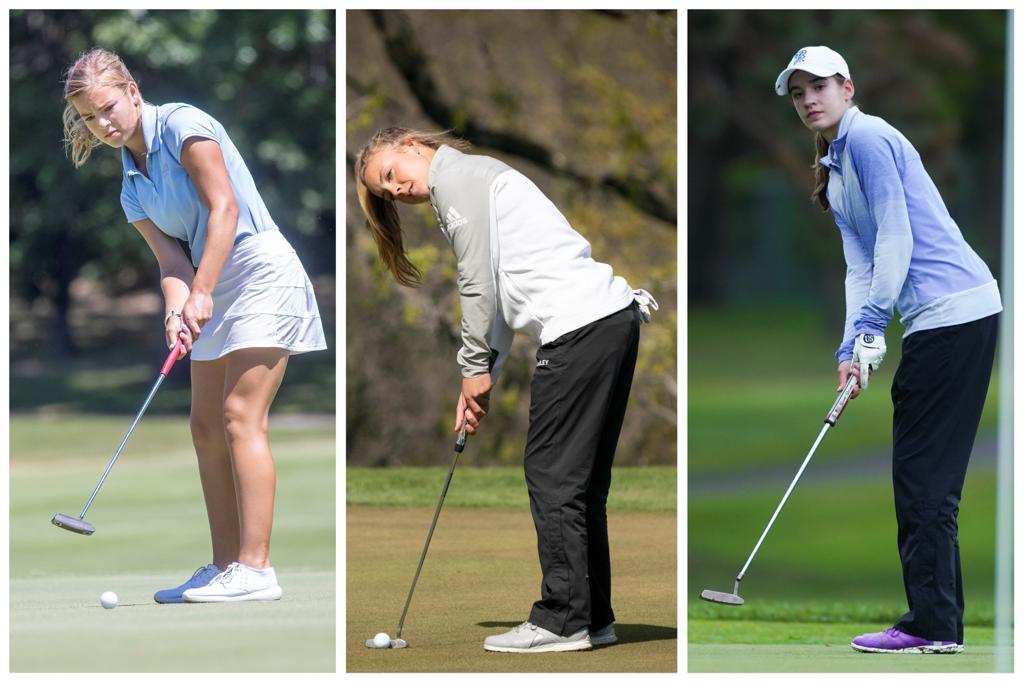 Golfers, from left, Reese McCauley, Isabella McCauley and Kathryn VanArragon, shown at various points in their high school careers, will play one more round for the Class 3A title. (Star Tribune photos)

Blaine junior Kathryn VanArragon did what it takes to best the McCauley sisters — play an exceptional round.

VanArragon turned in her best round of the season, a 7-under-par 65, in the opening round of the Class 3A girls’ golf state tournament Tuesday at Bunker Hills Golf Club in Coon Rapids. The two-day tournament will conclude Wednesday.

Simley's McCauleys — senior Isabella and sophomore Reese — are right behind VanArragon. Isabella shot a 67, and Reese is another stroke back at 68. Isabella is ranked No. 1 in the state by the Minnesota Golf Association, followed by Reese at No. 2 and VanArragon at No. 3.

Reese McCauley is the defending state champion, and Isabella was the medalist in 2019. Isabella didn’t compete in the state tournament last year, missing it to become the youngest girl in state history to compete in the U.S. Women’s Open. She was recently honored with the Ms. Minnesota Golf award.

Alexandria heads the team standings with a score of 318, nine strokes ahead of second-place Maple Grove.

In the boys’ 3A tournament, Northfield senior and Mr. Minnesota Golf winner Nate Stevens faces a challenge in defending his title. He shares the lead with Edina senior Jack Wetzel after shooting a 2-under-par 70. Wetzel is ranked fourth in the state and has the No. 1-rated Hornets in the team lead with a 298 total, three strokes ahead of Spring Lake Park.

Seven golfers are within one shot of the lead. Maple Grove sophomore Ryan Stendahl, ranked fifth, is among the five one stroke back.

The youth movement grabbed the spotlight in the boys’ Class 2A field at Ridges at Sand Creek in Jordan.

Pine Island/Zumbrota-Mazeppa, with a 309 total, holds an 11-stroke lead over Totino-Grace in the race for the team title.

In the girls’ field, defending state champion senior Mallory Belka shot a 4-over 76 to grab a two-shot lead.

Lake City is running away with the team title as expected. The Tigers registered a 330 and are 27 shots in front of second-place Fergus Falls.

Legacy Christian sophomore Emily Brandt picked a good day to turn in a solid round.

Brandt shot a 9-over-par 81 and takes a three-shot lead into the second round at Pebble Creek Golf Course in Becker.

Legacy Christian and Lac qui Parle Valley each had 354 totals to share the lead in the team standings.

Defending team champion Fertile-Beltrami positioned itself to go back-to-back. The Falcons shot a 323 and lead Duluth Marshall by 10 strokes.