Her round of 70 left Simley’s McCauley sisters in second and third place in a clash of three past state winners. 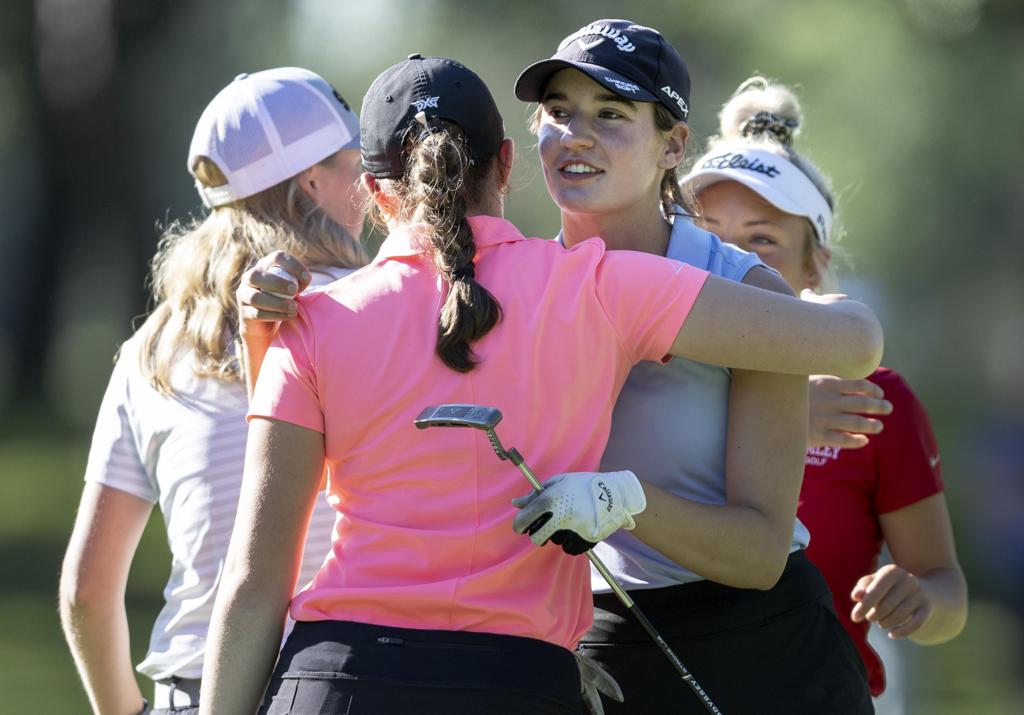 Blaine’s Kathryn VanArragon was accepting hugs after her round led to a state championship Wednesday. (Carlos Gonzalez, Star Tribune)

A gallery of fans waiting to see which talented McCauley sister from Simley, Isabella or Reese, would win a Class 3A golf state tournament showdown found themselves instead applauding Blaine’s Kathryn VanArragon.

VanArragon, who won the 2018 state tournament as a seventh-grader, added another title to her résumé Wednesday at Bunker Hills Golf Club in Coon Rapids. She held her lead after Day 1, shooting a 2-under-par 70 and prevailing with a 9-under 135 total.

She placed ahead of Isabella, a senior and the 2019 champion, and Reese, a sophomore and last season’s winner. Isabella shot a 70 Wednesday for a 137 total, and Reese shot a 71 for a 139 total.

VanArragon wouldn’t bite on themes of being overlooked or underappreciated. Her response stood out as the only time she didn’t go low the past two days.

“I really love playing with the McCauleys, and it’s been great to share the experience with them,” VanArragon said. “Honestly, I hope it’s made me a better golfer to have them.”

Sitting third in the state rankings behind you know who, VanArragon led after the first round Tuesday and posted another great round Wednesday. Her scorecard showed four birdies and two bogeys.

Isabella McCauley, who missed the state tournament last year to become the youngest girl in state history to compete in the U.S. Women’s Open, couldn’t close the gap.

She described her round Wednesday as “grinding for pars” because her ball striking wasn’t matching her solid putting.

“It was kind of frustrating to know that if I could get closer on some birdie attempts, I probably would have made them,” McCauley said. “I wasn’t able to play my best, but even if I had, Kathryn would have been tough to beat.”

VanArragon said battling with the McCauleys raised her level.

“They are just so consistent and so good,” VanArragon said. “So whoever won deserved it.”

Alexandria repeated as the team champion with a two-day total of 628, 16 strokes better than Maple Grove.

On the boys’ side, another compelling trifecta of players made for great drama. It ended with the first three-way tie for medalist honors since 2014, the first in the large-school class since 2003.

Historical footnotes didn’t do much for Owen Rexing (Rosemount), Nate Stevens (Northfield) or Jack Wetzel (Edina). Especially Stevens, who struggled to acknowledge that he had successfully defended his title.

“It doesn’t really feel like I won two years in a row because there are three guys at the top, not just one,” Stevens said. “I’d rather finish second than tied for first.”

A bogey on 18 cost Stevens the outright title. A missed 12-foot putt on the same hole meant Wetzel couldn’t clinch, either. Each shot a 70, matching Tuesday’s rounds. Rexing caught up with a 69 Wednesday after a 71 Tuesday.

All three players relished the idea of a deciding playoff. Stevens even offered to coordinate the do-or-die rematch.

“I think that would be fun for everyone,” he said.

Wetzel walked away with an additional blue ribbon as his Hornets won the program’s ninth title and first since 2019. Edina had a two-day total of 589, 14 strokes ahead of second-place Spring Lake Park.

“I just really wanted our team to come through,” Wetzel said. “It’s icing on the cake to win it individually, too.”

St. Croix Lutheran freshman Sam Udovich was a model of consistency this week at the Class 2A golf tournament. He shot his second consecutive 1-under-par 71 Wednesday to capture the boys’ individual title by two strokes at Ridges at Sand Creek in Jordan.

Southwest Christian junior Jacob Ferrin, who shared the first-round lead with Udovich, shot a 73 in the second round and was the runner-up with an even-par 144.

Pine Island/Zumbrota-Mazeppa held on to win the team championship with a 616, four strokes better than runner-up Holy Family.

In the girls’ tournament, which was reduced to nine holes for the second round because of a weather delay, Perham senior Mallory Belka successfully defended her individual championship with a 6-over 114 total.

Lake City, led by runner-up sophomore Ella Matzke with a 117, ran away with the team title with a 491 two-day total. Fergus Falls was a distant second at 530.

Witherow had opened with a 73 Tuesday. He edged Fertile-Beltrami defending state champion Rylin Petry by one stroke. Petry, a senior, finished with a 3-over-par 147, shooting a 72 Wednesday.

Fertile-Beltrami successfully defended its team championship by 30 strokes. The Falcons finished with a 632 total. Duluth Marshall was the runner-up at 662.

In the girls’ tournament, sophomore Emily Brandt helped Legacy Christian sweep the individual and team titles. She was the medalist with a 165 total, helping the Lions top defending state champion Lac qui Parle Valley for the team crown.