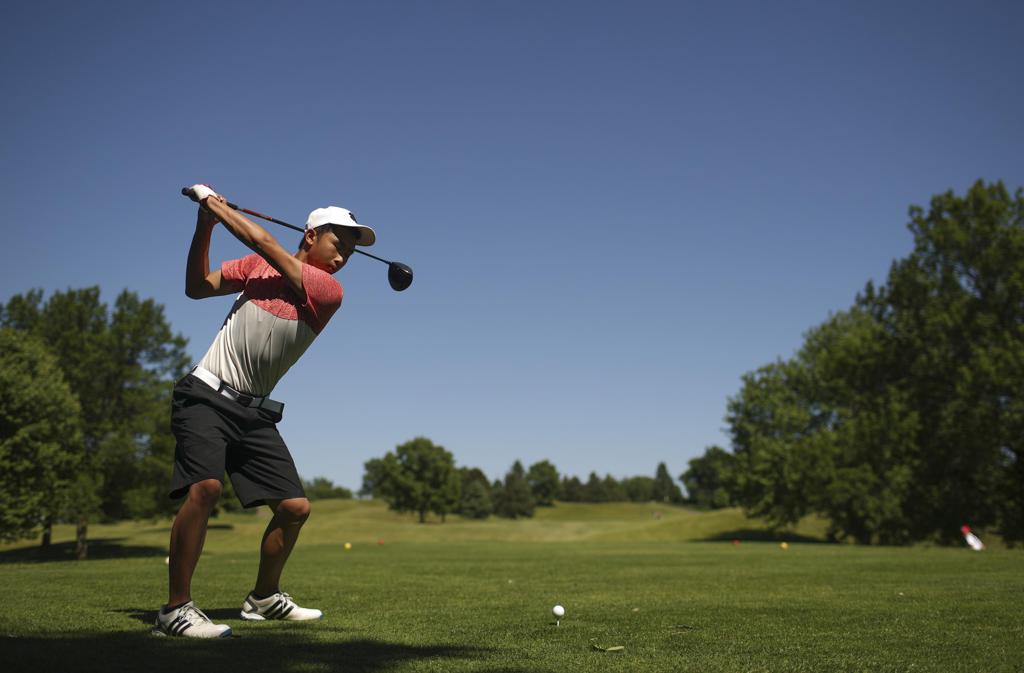 North St. Paul junior Logan Xiong teeing off on the third hole during a round with teammates at Manitou Ridge in White Bear Lake (Jeff Wheeler, Star Tribune)

There’s a potted plant about 12 to 15 feet across the room inside the Phalen Park Golf Course clubhouse. Logan Xiong estimates that’s the distance from which he sank the shot, the one that confirmed his golf abilities and earned him a new putter.

The Scotty Cameron putter will accompany Xiong, a junior at North St. Paul, as he returns to the Class 3A state tournament this week. He will tee off about 8:33 a.m. Tuesday on the Bunker Hills east course.

Xiong tied for 65th last spring but set his sights much higher for this week’s tournament.

There’s good reason for Xiong’s confidence. He shot a 154 and tied for Section 4 medalist honors June 1 at Bunker Hills. His signature moment came on hole No. 4 of the east course, a short, dogleg par 5 that he reached in two shots before making a 15-foot eagle putt.

That sequence was part of a 1-under performance on the back nine that also featured three birdies.

“He was in a zone,” Polars coach Jim Pearson said. “He’s a good ball-striker, and chipping and putting are his strength.”

“Bogeys don’t fluster him,” Pearson said. “A lot of times he’ll come back for par or for birdie.”

Xiong said he started with golf when his father, Lee, purchased a set of plastic clubs and balls. An enjoyment of whacking balls up and down the hallway or outside led to son pestering father for a real set of clubs.

About age 6, Logan recalled, he fired his first tee shot. Straight down the fairway. He said his father joked, “Wow, maybe my kid will turn out to be the next Tiger Woods.”

Arrival among the state’s top golfers took Xiong down a more circuitous path. The family budget didn’t allow for more than a nine-hole round twice a week. Sometimes his grandmother dropped off Xiong and his uncle at a nearby golf course just to practice chipping and putting.

When Xiong tried out for North St. Paul as a freshman, Pearson said he remembers thinking Xiong “had played before. You could tell from his swing.”

Consistency became the goal. Despite two consecutive trips to the state tournament, Xiong labored earlier in both seasons. He has yet to earn an all-conference citation. As a result, winning co-medalist honors at the section tournament this year moved Xiong to tears.

Xiong, who Pearson said plays trombone and excels in the classroom, could not find time to work on his game much in the offseason.

That changed this spring. Xiong took a job at the Phalen Park course in St. Paul, which includes the perk of free golf.

“This year it does mean more to me, so I’m putting a lot more thought and dedication into something I want to do the rest of my life,” Xiong said.

He recalled pulling into the parking lot at Bunker Hills for state last June, seeing license plates from Arkansas, Iowa, Kansas and Tennessee, and figuring they belonged to college scouts. He hopes to impress a few this week.

As for that putt that earned him a new putter, Xiong said it took place two years ago, just before his first high school golf season.

“I wanted a new putter, and my dad said I had to sink that putt if I wanted it,” said Xiong, who smiled and added, “so I sank it.”