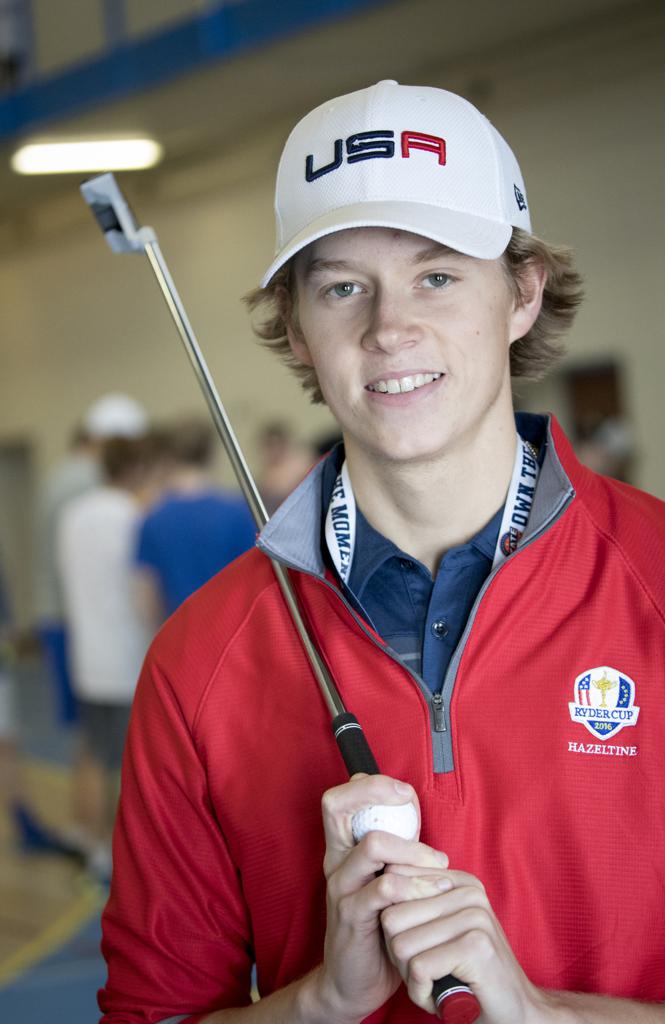 Hastings senior Nick Dittrich never will be accused of slow play on a golf course.

Dittrich’s unique approach to the game features no practice swings. He addresses the golf ball and lets it fly.

“When I take my club out of the bag, it’s time to go,” Dittrich said. “I walk really fast, too. It’s all about tempo for me.”

It started his freshman year when he returned to playing golf. He took a hiatus in middle school to concentrate on playing the drums and baseball.

“I did a 180-[degree turn],” said Dittrich, who still plays the drums and counts Prince’s “Purple Rain’’ as his favorite song. “My life is all about golf now.”

And playing it efficiently. He once finished an 18-hole round by himself in an hour.

“I’m not a [practice] range rat,” Dittrich said. “I wanted to play all the time. I wanted to get in as many holes as I could in a day.”

That wasn’t the case a few years earlier. He started golfing with his father, Chris, and older brothers, Mike and Joe, when he was 5 years old.

“I had a terrible year,” Dittrich said. “I had a real temper on the golf course. I wasn’t having any fun.”

A few years later, Dittrich didn’t like the alternative.

“In middle school, I was eating a lot of junk food,” he said. “I gained a lot of weight and was super lazy.”

A return to golf was in order.

“I just wanted to be part of a team,” Dittrich said. “I had no expectations. In my first round in a long time, I played extremely, extremely well. Everything took off from there.”

“Those early days on the course with family taught him how to play the game the right way,” McGinnis said.

“Nick learned how to compete with his family, but also learned that the game is something you have to enjoy.”

Dittrich only had to convince one family member that his peculiar style could be played consistently at a high level.

“My dad thought I was super nervous. He thought I was rushing, especially on the greens,” Dittrich said. “My brothers play at a similar pace. We’re not slow golfers.”

Dittrich, at most, might take 10 practice swings a round — nearly all of those with his putter on the greens.

“There is a lot more to account for in reading putts,” Dittrich said. “I feel good about what I’m doing.”

In back-to-back Class 3A state tournament appearances at Bunker Hills Golf Club in Coon Rapids, Dittrich has finished with 10-over 154s. He wound up 30th last year after finishing 20th as a sophomore.

“I’m really focused when I’m playing,” Dittrich said. “I have a good mind-set, and a lot of confidence in my game.”

Dittrich won the Bunker Hills Invitational with a 2-under-par 70 during the regular season last year. He had four other rounds between 69 and 71.

“Nick is successful because he is very efficient around the course,” McGinnis said. “Nick is so good off tee because he knows the ball has to be in the fairway. He understands the importance of setting up his next shot.

“He plays to his strengths by getting to the yardage he feels good about hitting into the green.”

Dittrich would like nothing better than to finish his career with a third consecutive state tournament appearance. He just doesn’t want to make it as an individual.

The Raiders’ last state appearance as a team was in 2014, when they finished third behind Edina and Wayzata.

“You never forget an accomplishment like that,” Dittrich said. “That would be super special.”