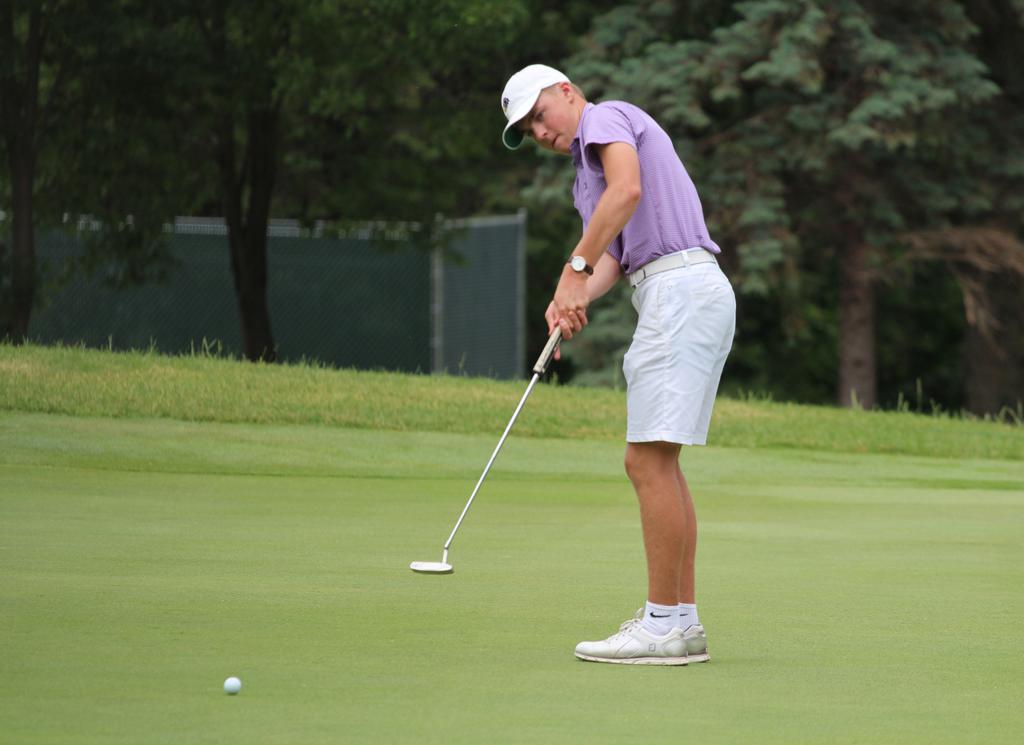 Chaska's Lincoln Johnson, the No. 1 ranked boys' high school golfer in Minnesota, tracks a putt as it approaches the cup.

Strange as it sounds, the most significant improvement to Lincoln Johnson’s golf game can be traced to the snows of April.

The Chaska senior has been on an incredible under-par run in recent weeks. He shot par or better in five consecutive meets, beginning with a 4-under 67 in a meet at Columbia Golf Course on May 7. Smack-dab in the middle of that streak was a personal-best 65 at the Chaska Town Course, a 7-under-par gem punctuated by a Jordan Spieth-like six-birdie run on his final nine holes.

The notion that a player would be at the top of his game after less than a month of actual play — thank you, Mother Nature — makes little sense on the surface. But Johnson didn’t waste time waiting for winter to end. He was working on his game, both physically and mentally.

He hit countless balls with his coach in the indoor practice area at Hazeltine Golf Club, making a tweak here, an adjustment there.

And he viewed winter’s lingering remains not through a lens of frustration as others did, but rather as an opportunity to strengthen his mental game.

“Everybody in the state was going through the same thing,” Johnson said. “My coach always talks to me about being patient and letting golf come to you. So I stayed patient.”

Consider it mental conditioning. In a sport where stray, unfocused thoughts often find their way to the club face, Johnson emerged from golf hibernation composed and collected.

“I’m very confident in my game right now. I know where the ball is going, and I’m staying on top of things mentally,” he said.

To Johnson, who has signed with the Gophers, his 65 was confirmation of his levelheaded offseason approach.

He comes from a family of golfers and lives adjacent to the 15th hole of the Chaska Town Course. He knows the course intimately — every drop, pitch, swale and hazard. He’d had great starts on the course before, but something always knocked him off his game, derailing a potentially memorable round.

“Maybe I put too much pressure on myself,” he reasoned.

Not so this time. Repeating his mantra of patience throughout the round, after starting on the back nine and making the turn at 1-under, he caught fire on the front nine. A birdie on the first hole was followed by two more, on Nos. 4 and 5.

With two par-5s coming up — both birdie opportunities — and a short and straight par 4 at No. 8, Johnson — a long hitter who loves his driver — realized he had a chance to do something special.

“I started thinking ‘How can I get a good score?’ ” he said.

Thinking too far ahead was something Johnson usually tries to avoid. But considering how focused and imperturbable he’d been all season, he allowed himself this luxury. He finished with three consecutive birdies for a school-record 65.

His strong play this season has catapulted him to the No. 1 spot in the boys’ individual state rankings according to www.mngolf.org. But his biggest goal is helping his team to the Class 3A tournament before he graduates.

He shares the captaincy with teammates Dawson Wills and Alex Pries, both of whom also will golf in college (Wills at Washburn University in Topeka, Kan., and Pries at Northern Iowa in Cedar Falls). They’ve gotten close, but for three years running, the Hawks have finished as runners-up in Section 2. In each of the past two, it was Minnetonka that claimed the section title. The Skippers went on to win the Class 3A championship in 2016 and finished second last year, leaving the Chaska players to think about what might have been.

“It hurts a little bit, but we can’t worry about it,” Johnson said. “We just have to practice harder and try to get better. And relax. If you get frustrated, you can’t score well and make birdies.”