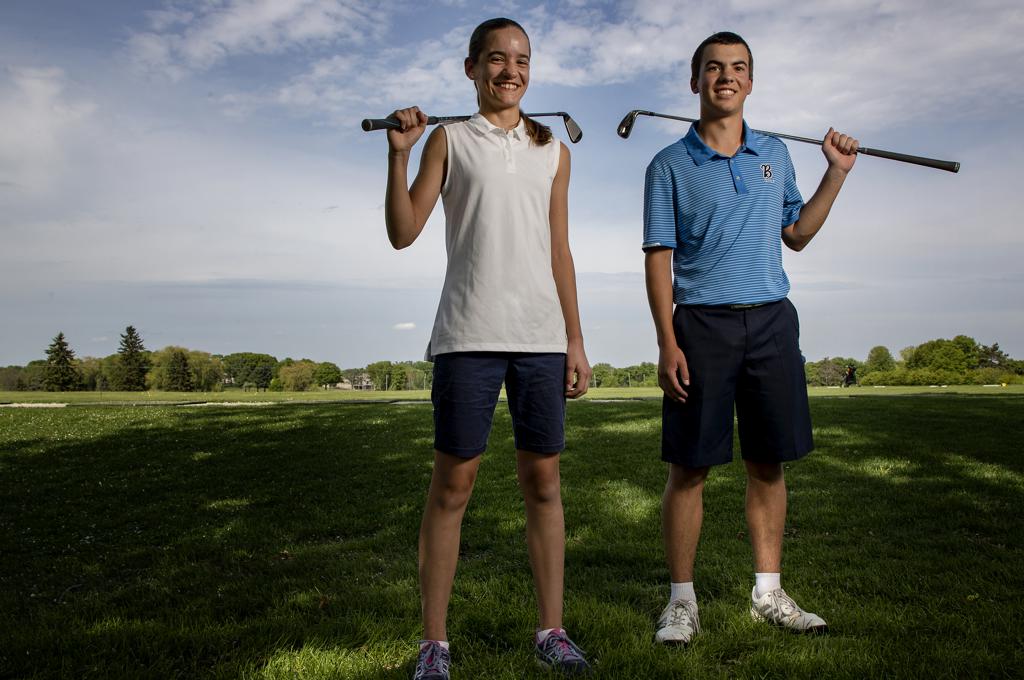 After three years of having his family’s full attention for his high school golf success stories, Caleb VanArragon must share the spotlight this spring.

Not that the junior standout at Blaine minds too much. He enjoys swapping stories with younger sister Kathryn, already a strong player as a seventh-grader.

The siblings are favorites to qualify for the Class 3A state tournament out of Section 5. The section meet takes place this week at Bunker Hills in Coon Rapids for Caleb, and The Links at Northfork in Ramsey for Kathryn.

Both seek results similar to May 15, when they arrived home from their matches as medalists. Next they hope to advance together to the state tournament June 12-13 at Bunker Hills.

“I’m really proud of Kathryn and it would be awesome if both of us could play together at the state tournament,” Caleb said. “But first we’ve got to get there.”

Caleb learned the hard way that focus on the present is critical to golf success.

He exploded onto the scene as one of only four eighth-graders to qualify for the 2015 state tournament. He tied for third and the performance elevated the youngster’s profile.

A year later, Caleb said he, “got in my own way at sections” and fell one stroke short of forcing a playoff. Missing the cut of a state tournament field he previously dominated gave Caleb pause.

“I learned you can’t be scared on a golf course,” he said. “You have to let your nerves help you, not paralyze you.”

Blaine boys’ golf coach Kevin Overgaard offered simple yet important advice: Your next shot is your most important shot.

As a sophomore last year, Caleb earned considerable attention by carding a 9-under 63 in April at the TPC in Blaine, setting what is believed to be a boys’ high school state record.

“I had it that day, more so mentally than physically,” he said.

Last year, he rolled with his success and capped the season by tying for seventh at the state tournament.

“The pressure and expectations were a problem for me as a freshman and it took a year to learn how to handle them,” he said.

Throughout Minnesota’s never-ending winter of 2017-18, Caleb readied for this season at the Bunker Hills indoor golf simulator. He worked alongside Kathryn, who hoped to be eligible to join the varsity ranks. The Anoka-Hennepin School District requires committee approval for seventh- and eighth-graders to be eligible for varsity competition.

Once on the roster, Kathryn showed she belonged through consistent rounds of solid golf. She won the Northwest Suburban Conference title as a 12-year-old playing at times against girls six years older.

“It took some getting used to but, at the same time, it was really fun,” said Kathryn, who credited Blaine senior captain Se Kwon for being “really welcoming.”

Then again, Kathryn wasn’t an average, wide-eyed youngster. In 2016, she qualified to play in the Drive, Chip & Putt Championship at Augusta National Golf Club — home of the Masters.

She placed fifth out of 10 golfers in the girls’ 10-11 age division. The experience included putting on the 18th hole and walking the hallowed course during practice rounds.

“I just remember hitting a drive on the range and thinking what a cool experience it was,” she said.

When it comes to experience, Caleb shares only “the things I wish somebody told me when I was her age,” he said, such as having a pre-shot routine.

Otherwise, he stays out of the way and looks forward to coming home to compare successful rounds with his sister.