Lakeville North’s Megan Welch has placed fifth and second in 3A state meets. 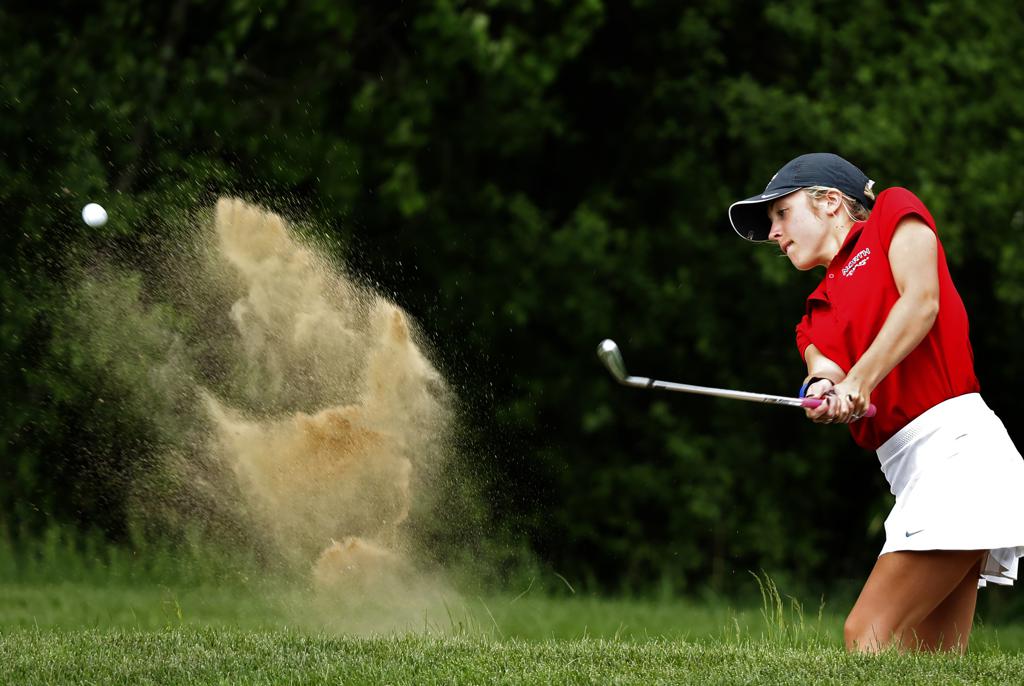 Megan Welch walks down the 12th fairway at Valleywood Golf Course in Apple Valley during a South Suburban Conference meet, chatting with Sydney Regalado of Rosemount.

Three holes later, the Lakeville North senior is socializing with Avery Sawchuk of Burnsville. She catches up with Panthers coach Dennis Dawson on the next hole.

Welch thoroughly enjoys talking to fellow competitors or her coach as she makes her way around the course.

It serves as a calming effect for the state’s No. 6-ranked girls’ golfer, helping her stay relaxed during a round. She is among the favorites to win the Class 3A individual state championship.

“I’m intense, but I’m talkative and like to have fun,” Welch said. “It’s a good balance for me.”

The Bradley recruit is coming off a fifth-place finish in the state tournament last year. She tied for second place as a sophomore.

“I play good for 12 or 13 holes, but can’t finish,” Welch said. “I have to be more comfortable being under par, and staying there.”

A year ago in the state tournament, Welch finished four strokes behind co-medalists Joanna Kim of Edina and Sophia Yoemans of Red Wing. She played the last three holes 4-over-par.

“I feel like I have a little bad luck,” Welch said. “Little things keep happening to me that cost me shots.”

The analytical one would know. She is the school’s Athena Award winner — presented to a senior female who excels in academics, athletics and fine arts — and plans to major in mathematics in college.

“I was surprised to get the Athena. It was awesome,” Welch said. “It was cool because golf doesn’t usually get recognized by our peers and other coaches.”

She became Dawson’s third member of the golf team to win the award. The previous two were multisport athletes, unlike Welch.

“The fact that Megan, a single-sport athlete, was chosen shows the respect that coaches and our administration have for her,” Dawson said.

Welch also was honored as one of the six female finalists for the St. Paul Downtown Lions Club amateur athlete of the year.

Last week Welch led the Panthers to their sixth consecutive South Suburban Conference crown. She also was named to the Ms. Minnesota golf watch list, presented to the top golfer who is a senior.

“It’s been a big year for Megan,” Dawson said.

Welch has advanced to the state tournament as an individual each of the past four years. She came up short in her bid as a seventh-grader, losing to a senior on the third playoff hole for the final spot in Section 1.

“I wanted to be one of those girls that went to state six straight years,” said Welch, who counts on precise accuracy to offset her petite 5-5 frame. “I was devastated after that. It fired me up, motivated me.”

Her motivation now focuses on the team aspect over any individual accolades. The Panthers are currently ranked No. 2, but haven’t earned a berth in the state tournament as a team since Welch’s eighth-grade season. Top-ranked Edina has won the past three section team titles.

“We have a young team, and I want to take one last trip with them,” Welch said.

Her younger sister, freshman Emma, is part of that group. The Panthers also have another sister combination in sophomore twins Emily and Olivia Plotnik. Their top six is rounded out by freshmen Ashley King and Julia Sabetti.

“We have a good team, and could make some noise,” Welch said. “I can’t think of anything better than going to state with my best friends and teammates my senior year.”