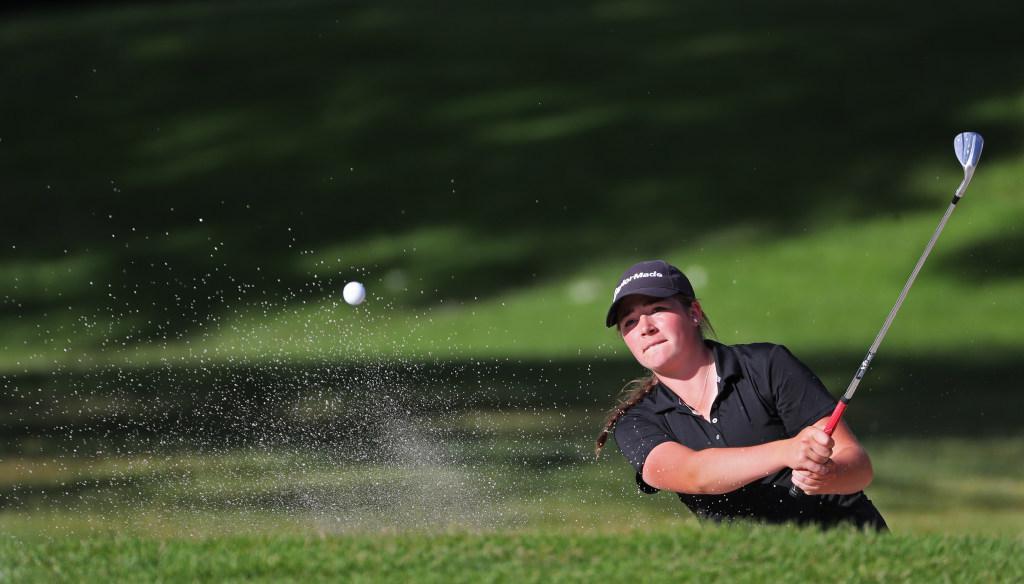 Sophia Yoemans, playing in the 2017 Class 3A girls’ golf tournament.

Her record lasted all of 15 minutes.

Classmate Sophia Yoemans, in the foursome trailing Herzog, shattered the mark with a 9-under-par 63 in the opening round of the Class 2A meet Tuesday at Ridges at Sand Creek in Jordan.

Herzog wound up three strokes back, shooting a 6-under-par 66. The previous mark, held by numerous players, was a 5-under 67.

“That’s the best golf I’ve seen in one day by two girls’ players,” said Red Wing coach Mark Herzog, in his 35th season of coaching. Leah is his daughter. “It was impressive.”

Yoemans’ 63 was one stroke short of the girls’ all-time record by Maggie Heggerston of Pequot Lakes, who fired a 10-under 62 in a section tournament at Pokegema Golf Course in Grand Rapids in 2014. Heggerston just completed her junior season with the Gophers.

“It was an awesome round today,” Yoemans said. “It’s the lowest round that I’ve ever shot.”

Yoemans, the state’s No. 1-ranked player, got off to a blistering start, shooting a 6-under-par 30 on the front nine. She finished the day with nine birdies and no bogeys.

“I hit my driver really well. My ball striking was consistent all day,” Yoemans said. “More putts could have dropped for me, though.”

Leah Herzog shot 32 on the front side and finished with seven birdies and one bogey.

“I made a lot of clutch putts on the front nine,” she said. “I was dialed in with my irons on the back nine.”

A year ago Yoemans shared the Class 3A individual state tournament title with Joanna Kim of Edina with 2-over-par scores of 146 at Bunker Hills Golf Course in Coon Rapids. The Wingers dropped down the Class 2A this season after moving up and playing in Class 3A the previous two years.

The Wingers head into Wednesday’s final round in third place in the team competition, eight strokes back of Detroit Lakes. The Lakers have won five of the past six team titles.

Nine of the top 13 spots in the individual tournament are held by seniors, led by East Grand Forks senior Nate Deziel with a round of 3-under-par 69.

Defending champion BOLD has a seven-shot lead over Lac qui Parle Valley in the race for the team championship.