The junior followed her record-breaking Tuesday round with a 6-under par 66 to win the individual title by eight strokes over teammate Leah Herzog. 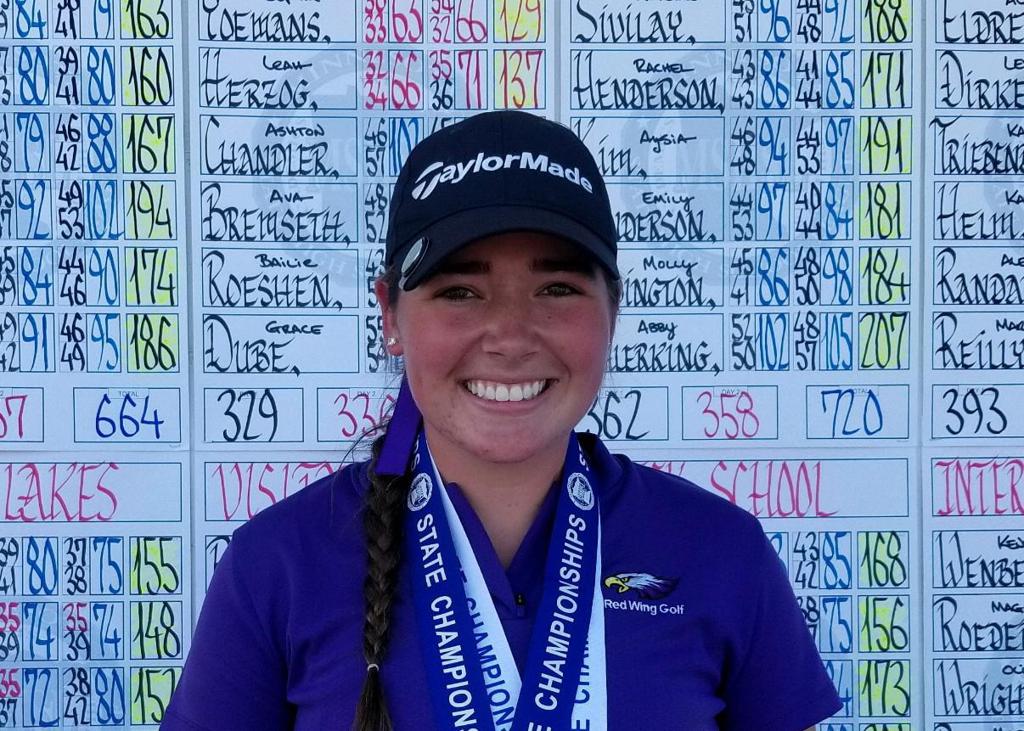 Starting in elementary school, Red Wing classmates Sophia Yoemans and Leah Herzog have grown accustomed to bringing out the best in each other.

The duo, now high school juniors, is taking it to extremes on the golf course.

Yoemans fired a state tournament and course record 15-under-par 129 to win the Class 2A girls’ two-day meet Wednesday under ideal playing conditions at Ridges at Sand Creek in Jordan. She shared the Class 3A individual title with Joanna Kim of Edina the previous year.

“They are definitely different,” said Yoemans, who wound up with a 2-over 146 a year ago at Bunker Hills Golf Course in Coon Rapids. The Wingers dropped down to Class 2A this year after opting up the previous two seasons.

Herzog was the runner-up, eight strokes back at 7-under 137. It was another 11 strokes back to the third-place finisher.

“It’s unique to have the No. 1 and No. 2 players in the state on the same team,” Yoemans said. “We both have gotten a lot better this year, and really pushed each other. We have gone back-and-forth all year.”

Yoemans, the state’s top-ranked girls’ player, shot a 6-under 66 in the final round after opening with a 9-under 63 — also state tournament and course records — on Tuesday.

“I didn’t want to think about my round yesterday,” Yoemans said. “I was just thinking about hitting solid shots.”

She did just that for the second consecutive day. Yoemans started the final round with a 2-under 34 on the front side. It helped her gain momentum for the backside, where she recorded a 4-under 32 — one shot better than her final nine the previous day.

“My driver was the best club in my bag. It was big being in the fairways,” Yoemans said. “My putting was solid, too.”

Herzog wound up with the third best round of the final day, registering a 1-under 71. In the opening round, Herzog shot a 6-under 66 that stood as a state tournament record until Yoemans completed her round 15 minutes later.

“I can’t compete with that [a 63],” an astonished Herzog said. “It’s great being competitive, but it’s still kind of hard [finishing second]. It doesn’t happen very often when you are that much under par.”

The best of friends “on and off the course” are both Division I-bound. Yeomans has committed to Missouri and Herzog to Nebraska.

“Sophia and Leah have been fabulous all year,” Wingers coach Mark Herzog said. He is the father of Leah. “They are heads and tails above everybody else.” 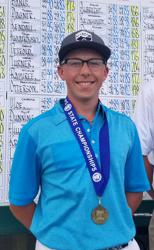 East Grand Forks senior Nate Deziel wasn’t intimidated by having two past champions — Derek Hitchner of Blake in 2016 and Cecil Belisle of Red Wing in 2017 — in the field. The first-round leader finished with a 7-under 137, edging the late-charging Hitchner by one stroke and Belisle by two.

Deziel was bolstered by having Hitchner in his group both days. He shot a 3-under 69 in the first round, opening up a two-stroke lead over his counterpart.

“I haven’t played against that type of competition all year,” Deziel said. “Playing with the best brought out the best in me.”

Deziel shot a 4-under 32 on the front nine, widening his lead to four strokes. Hitchner shot a final round 67, including a 33 on the back nine, while Belisle matched Deziel’s 68 during the final round, ending with a 32 on the last nine.

“I couldn’t have ended my (high school) career on a better note,” Deziel said.

Mound Westonka freshman Mitch Krebsbach aced the par 3, 121-yard 15th hole with a pitching wedge during the final round.