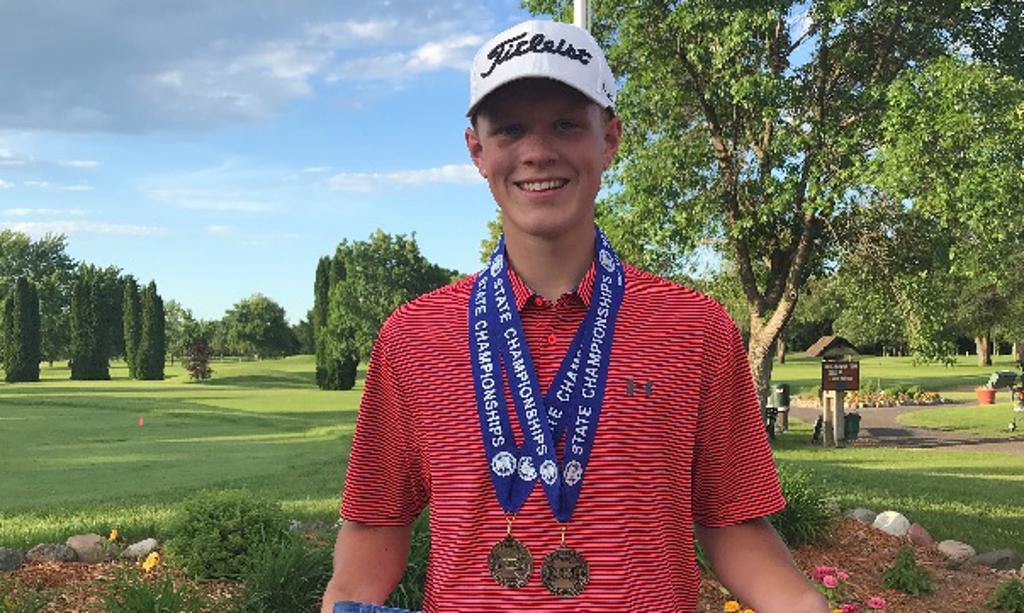 Ben Laffen shot a 1-over-par 73 on the round to win the two-day Class 1A boys' golf tournament individual title and help his team tie for the team championship. Photo: Nate Gotlieb

Sleepy Eye United coach Crystal Ibberson told Ben Laffen late in his round Wednesday that he needed a birdie on his final hole to win the Class 1A title.

The senior did just that, carding a 3 on a par-4 to win the tournament by one stroke.

Laffen shot a 1-over-par 73 on the round and finished the two-day tournament at even-par 144 at Pebble Creek Golf Club in Becker. His final round also helped Sleepy Eye United to a share of the team championship with Mounds Park Academy.

“It’s something we’ve definitely worked for this whole year,” said Laffen, who has signed with Minnesota State Mankato. “Just seeing that you were the highest on the board with the lowest score, that’s very encouraging.”

Laffen was even-par on his front nine Wednesday before bogeying three of his first five holes on his back nine. He birdied his 15th hole before scoring back-to-back pars and the birdie to cap his round.

Laffen said he was a little nervous but excited when Ibberson told him he needed a birdie on the final hole. He said he hit the fairway with his drive on the hole before sticking a wedge shot close to the pin and making the putt.

“I just put my head to it and committed to every shot,” he said.

Girls’ champ wins by one

Lac qui Parle Valley’s Rachel Halvorson held a three-shot lead heading into the final nine holes Wednesday. The sophomore finished with a 7-over 43 on the back nine to win the Class 1A girls’ individual title by one stroke over Legacy Christian Academy senior Sophie Gray.

Halvorson shot a 7-over 79 after a 4-over-par 76 on Tuesday to help Lac qui Parle Valley win its first team title.

“It feels awesome,” said Halvorson, playing in her fourth state tournament. “I can’t really describe it.”

Halvorson tied for 12th at state as a seventh-grader, finished ninth as an eighth-grader and took 11th last year. Her coach, Kipp Stender, said she’s improved by about three to four strokes each year and that she averaged about 78.5 strokes per 18 holes this year.

“Winning state’s been a goal of hers for a few years,” said Stender, adding that Halvorson “hits more balls than any kid in our area.”

Halvorson said she parred seven of nine holes on the front nine Wednesday before she “hit a few bumps” on the back nine. She parred her final two holes to clinch the title.

Lac qui Parle Valley finished with a two-day score of 714, one stroke ahead of Fillmore Central and nine better than Park Christian. Gray, playing in her sixth state tournament, finished second for a third consecutive year.